In this article by Donato Masci and Giacomo Arcangioli, we are going to introduce a tracklist to evaluate the listening condition of audio production Control Room. The proposed evaluation process is clearly subjective and must be combined with some measured objective parameters, but can be useful to further investigate and explore the state of your studio

As professional acoustic designers, here at Studio Sound Service, we frequently deal with the complex relations undergoing physical laws and representation of sound waves and their human perceptual attributes.

Might it be the frequency dependent balance between transmission of road traffic noise and the perceived annoyance of a listener inside his/her private house or the ones linking reverberation times with STI parameter across a stand-up comedy venue or the feeling of spaciousness in an Opera theater.

This is a muddy territory where the inevitable admitted tolerance linked to decades (and counting!) of psychoacoustics test and surveys statistical results have to match clients expectation as well as specific regulations.

Nevertheless, we want to go even muddier exploring specifically the characteristics of music production control rooms, probably one of the most disputed environment for an acoustic design, as well as a challenge extensively approached by people ranging from engineers to enthusiastic final users.

Thus, this article will then look into how the critical adoption of music tracks might result helpful to examine specific bits of the final listening experience of such kind of audio facilities from an informal but scientifically solid approach.

Although the following tracklist-procedure has a much lesser reliability respect the above mentioned psychoacoustics statistical tests, the results of the latter gives us insight on where to look for in our, one-shot, perceptual tour.

Listening test trustworth mainly comes from strictly defined conditions and procedures, necessary for the extrapolation of solid results, such for example the common case where a single frequency sound at a time is involved, which is quite an unusual soundscape in real life!

In general, the perceptual attributes of real sound fields are indeed highly influenced by their mutually interacting frequency content as well as by their temporal characteristics, as phenomena like masking or coloration might strongly affect the perception beside, for example, the concepts of absolute thresholds or difference limen obtained from specifically isolated conditions.

For example It is well known how in the low frequency region the sound field of a room is governed by a modal behavior, where due to dimensional relations specific frequencies are preferred resulting in a sound field which is strongly position dependent and whose decay times MT60, i.e. the times required for a specific mode to decay by 60 dB, are eventually perceivable.

Fazenda et Al. [ASA,2016] in a recent article report methods and results of a psychoacoustic test where the perceivable effects of modal decay times respect to frequency and level are investigated using single frequency signals and music, which can be thought as the composition of several transient frequencies contributions.

One of the most interesting point reported from our perspective is how the minimum detectable decay time is generally higher across frequency for the music case, as representing a more complex material, but also when the author question the meaning of having acoustic design targets whose improvement are not perceivable respect less ambitious targets based on perceptual thresholds, commonly implying easier, cheaper and space limited solutions.

It must be also noted that measuring properly MT60 is not straightforward, and not necessarily found in spectral analysis devices or software, thus by the listening of tracks with well known frequency and tempo characteristics we intend to have a validation of our design paradigm.

Furthermore, an intuitive reasons why commonly objective assessments are not complete descriptors of the listening experience lies on the fact that in practice are usually carried out employing a single omnidirectional mic: this might be a technically valid tool for the physical evaluation of the sound field in a point, but it is quite different from what our two directional ear-sensors actually pick and send to our brain, implying that characteristics linked with spatiality are then mostly lost with a common unique measurement.

For what concern control rooms and the relative spatial sound field attributes, the perception of a correct and well defined stereo image is a must requirement for a proper listening experience: furniture and loudspeaker edge diffraction, minimized by flush mount monitors, asymmetric configurations or early reflections approaching the listener are some of the possible causes of a bad general stereo image, where for example the fundamental content details relative to the phantom mono channel, such as voice or snare drum, might be mistakenly perceived.

On the other hand, the width of the image, the correct spatial sensation of the phantom mono channel and the perceived spreading (or not!) of sources position are, once again, some of the perceptual attributes we usually test and actually optimize in the final stages of our designs adopting music material.

Don’t get us wrong, our designs are still mainly leaded and evaluated by objective measurement and “truth” remain what the mic report, but as music lovers and considering the final functionality of such control rooms, we usually undergo such final dedicated music content listening session to have a further perceptual confirm and exploration of our design targets as well as a fun and effective demonstration tool for clients.

So, sit comfortable in your studio and have a listen of our tracklist tour for a further step in the understanding of your listening experience, and why not to have a glimpse at Studio Sound Service music taste.

Many helpful bits for a critical listening:

This track has a nice snare drum punch in the mid-low frequency region also well balanced with the lower frequency kick drum and bass guitar envelope, resulting in a good tool for mid-low content balance investigation as many well separated impulses are present in this frequency region.

3 Red Baron (SPECTRUM), Billy Cobham VS  Wake Up (SELF TITLED), Rage Against the Machine

In order to explore audio system dynamic range capability and the relative performance of the room tested, we usually undergo a listening comparison between this two tracks.
The first has a lower loudness but a much more rich dynamics respect to “Wake up” (a song we do like a lot from the 90’s when the famously disputed loudness war began) which basically is a flat wall of sound as you can see from the second waveform depicted below:

Furthermore, If you have in your studio big monitors and some near field, explore the difference in perceived depth and extent of the dynamic range; whether your nearfield are high quality you’ll probably be surprised by the improvement of listening to the more generous system.

We usually consider to first part of this track up to 1:08, where a deep and isolated low frequency impulse peaks at 29 Hz.

This is such a low frequency that many audio system lacking low frequency equipment/components won’t be even able to reproduce those sounds! However when properly reproduced this permit the exploration of the low frequency decay control of your room, where in adequately dry environments it is possible to clearly perceive the sound wave with your body beside your ears.

Also, such low but full of energy beating usually excite many of the studio’s bits or portion , such as the floor, where usually the subwoofer lies, the windows or the console table, which might result highly detrimental for the listening experience.

We couldn’t exclude this track, as a pure challenge at low frequency for many audio system: in our experience we’ve listening to many weird artifacts from bass reflex apertures due to the high density of sound energy to be reproduced.

This piece is helpful to appreciate low frequency content balance as well as your studio booming and low frequency definition, mostly trying to understand if each note start is separately perceivable.

First of all, we do like a lot Devendra!

We usually use this track to check or optimize an audio system correct phantom mono channel reproduction and perception, clearly examining if it’s sensed at the center of the stereo image but also investigating if sound is perceived as coming from points rather than a more extended region. Such analysis is facilitated by the fact that mono content of this track is quite frequency limited, making it easier to understand spatial attributes.

Some tricks for investigate stereophony with this track:

CLOSE YOUR EYES AND ROTATE ON YOUR CHAIR

In order to understand if phantom mono perception is correct limiting possible bias related to other element of the studio, we usually have a listening at the engineer position with eyes shut, we have a 360° spin around the chair pointing, with your eyes still closed, with our hand where we think is the phantom channel, comparing it afterwards with the actual mid point between the monitors.

POINT OR AREA?
In order to understand if the phantom mono is perceived as coming from a point (best condition) or an area is useful to move your head from the listening position but still staring at the center of the stereo image, as this channel might be eventually perceived as spatially spread due to obstacle and loudspeaker edge diffractions: if you can compare the definition of flush monitor with respect to speaker on stands or over the console. 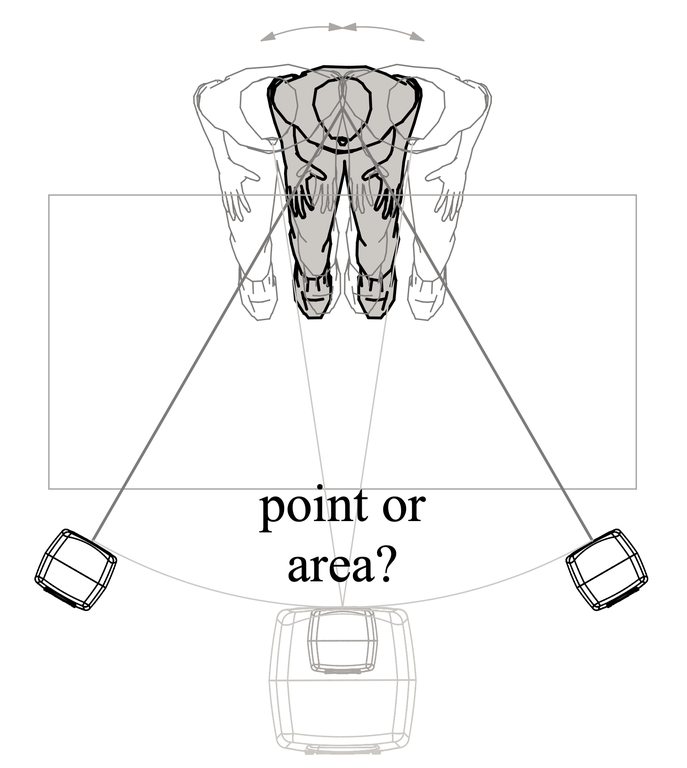 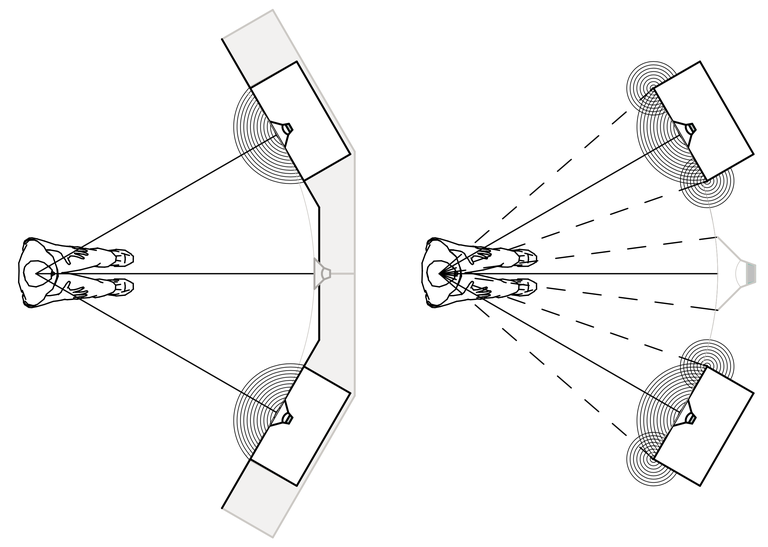 These are the two tracks proposed and analyzed by Fazenda et Al in the article mentioned in the introduction: the listening of this songs might help you examine low frequency decay times effects by comparison as both are rich in that frequency region, but are quite different in the time domain as one has a repetitive and time-isolated beating while the other is a jazz piece with many, close in time, transient sounds

This song is a great mix beyond taste, as each instrument has a frequency placement well defined where many details are effortless perceivable.
However, although helpful for stereophony and broadband frequency balance exploration, the reason why usually have a listen to this with clients is far from technical, since beside being a really good mix, the joyful emotional response associated with this track let commonly people to cut critiques loose – we play it at last as a celebration ritual of our designs, basically turning our clients into pals 😊