The Teatro del Popolo in Castelfiorentino (FI) has been restructured by the Guicciardini & Magni architecture firm, in collaboration with arch. Sergio Fedi. Donato Masci and Fabrizio Giovannozzi participated as acoustic consultants for Studio Sound Service.

"A Theater That Is a Show". This is the slogan chosen to greet the reopening of the Teatro del Popolo of Colle di Val d'Elsa after about two years of work that have allowed to renovate the roof and renew the hall, thanks to the contribution of the Mps Foundation.

"The theater, completed in 1930 by engineer Gerard and wanted by Mino Maccari, was restored in the 1970s, and on that occasion the decorations were renewed and new spaces were added for services and technical rooms.
The recent renovations of the Teatro del Popolo are part of a further series of extensions to the hall and to outside spaces.
The first phase of 1996 consisted in the complete restructuring of the public service spaces with the creation of new rooms, the reduced, the bar, the foyer, the refurbishment of plants, of the stairway system and of the Security outputs.
The intervention, divided between restructuring and expansion of existing volumes, covered 930 square meters of gross floor area (4,100 m3).
In addition to various adaptations for the abolition of architectural barriers, the theater needed a general adaptation of the plant system, a revision of the escape route system and the extension of the internal public spaces.

The current project identified the response to these needs through a general overhaul of the building between the blockade of the theater and the adjoining public offices.
The interventions therefore included structural and plant works, as well as the revision of architectural elements and finishes. In fact, the electrical and heating system has been completely replaced as the armchairs and the hall and stage curtains have been replaced.
The total number of audience seats is 790. Outside works included the finishing of the prospectus by completing also the unfinished front on Via Roma.
The work on the area will soon be completed with the resettlement of the area in front of the theater and the creation of a new square. " 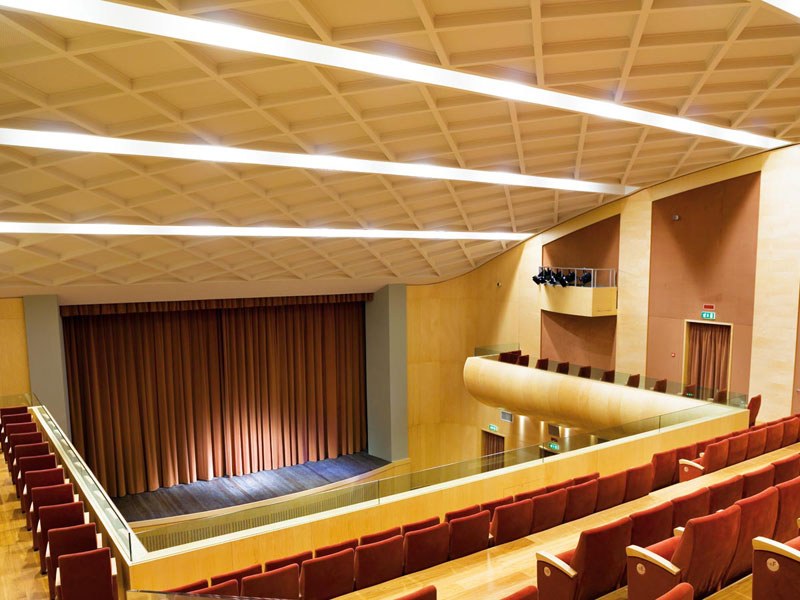 Description
Platea: n. 520 sits; Gallery: n. 268 sits; Total: n. 788 sits; sits for handicapped people: n. 4. With the latest just ended works, the complete reconfiguration of the hall and of the stage tower was carried out. The cover and structure of the grating was reconstructed. The hall was paved, covered with wood and velvet, featuring a new plaster lozenge ceiling. The gallery has been expanded and modified to increase the level of visibility and comfort. Similarly, acoustics of the hall have improved in order to increase its performance quality. 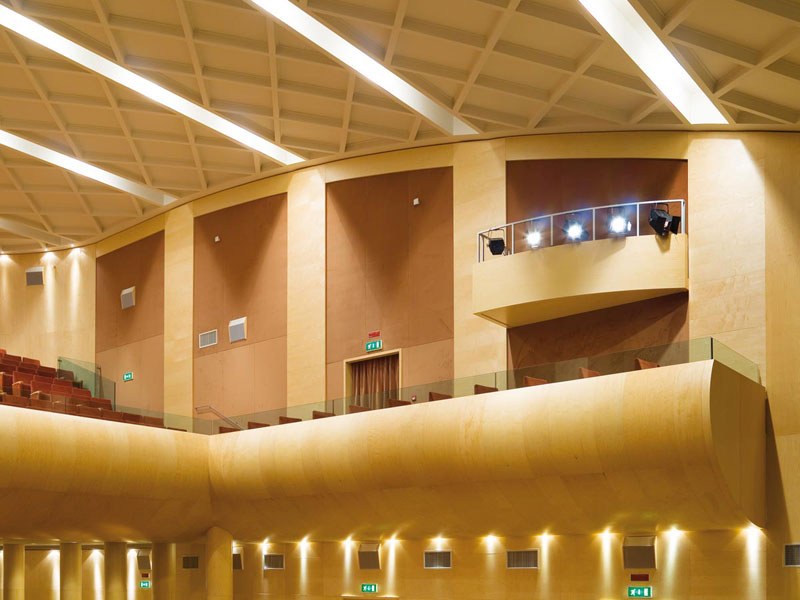